skip to main | skip to sidebar

I was recently informed that a blog such as this one that disseminates information about an ongoing archaeological project is strongly looked down upon (and could lead to legal ramifications for the author) by the Mexican National Institute of Anthropology and History (INAH), the governmental organization that issues permits. More specifically, the issue is in distributing information about a project before the report containing such information has been submitted to INAH. All archaeological data must be submitted to INAH before it is distributed in any other way. After such reports have been submitted and approved, the data can be distributed however the researcher sees fit. Unfortunately, this means that archaeological blogs in Mexico cannot post about on-going projects and finds. Consequently, I have temporarily hidden all posts that included data from our ongoing excavations, and will repost them once the reports have been accepted by INAH. In the meantime, I will continue to post about the project generally, but will not be able to include any of our recent finds.

I was very saddened to learn about this policy, and it pains me to have to hide my posts, because I see this blog as an ideal way to engage the public and all other stakeholders in my research. I strongly believe that engaging all stakeholders is an important component of doing archaeology in an ethical manner. I strongly dislike the tendencies within archaeology and other academic disciplines to hoard data and to distribute archaeological findings only within academia. Indeed, the Society for American Archaeology Principles of Archaeological Ethics includes the following:

Principle No. 4: Public Education and Outreach

And of course, INAH does not forbid the use of blogs altogether. Once the reports are in, I may distribute as much data as I would like on the blog. But I enjoyed the ability to share with you readers our latest and greatest or mysterious finds. I think that including on-going finds is one way to more effectively engage the public. There is something about the immediacy of it that is important, that is lost in annual or final reports or even articles.

I do think that archaeology as a discipline is moving in the right direction. Every year more and more researchers include blogs and other forms of public outreach in their projects, and scholars are coming up with new ways to engage stakeholders using the wonderful tool of the internet. I think it is only a matter of time before such efforts are more widely appreciated. In the meantime, I will do what I can.
Posted by Xaltocan Archaeological Project at 4:02 PM 5 comments:

Spiders in the Sand

The site or place name of Xaltocan comes from Nahuatl, the language spoken by its inhabitants at the time of the Spanish conquest. Originally, it would have been pronounced "shal-TO-kan" but over time the pronunciation changed, and it is now pronounced by its residents as "hal-to-KAN."

The word Xaltocan is derived from xal(li) or sand, toca(tl) or spider, and can or place of, means the "Place of spiders in the sand." The glyph for Xaltocan is composed of a circular area filled with dots, presumably representing sand, and a spider spinning its web in the center.

Xaltocamecas (residents of Xaltocan) today have a great amount of pride in their Prehispanic past, and display their place glyph on various buildings and monuments in the town. The most recent addition is a reproduction of the Aztec calendar stone that prominently features Xaltocan's glyph at the center: 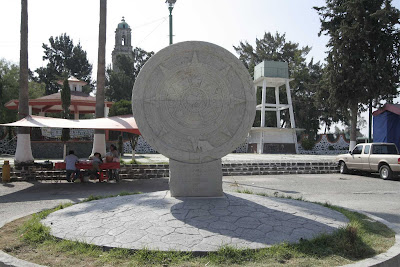 And a close-up so that you can see the glyph: 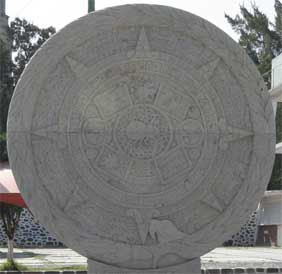 Xaltocan's residents clearly place their home town at the heart of the Aztec Empire. We might interpret this action as an attempt to re-appropriate power and importance that was lost when they were conquered, though I have not spoken with anyone regarding the statement they are making with this statue.

Xaltocan's residents also show pride in other ways, including an annual oratory contest and Prehispanic gastronomic fair that showcases Xaltocan's food specialties, such as fish prepared in various ways (including tamales), maguey worms, and snails. To find out more about this fair, visit the town's website (in Spanish only) at http://www.xaltocan.org.mx.
Posted by Xaltocan Archaeological Project at 4:50 PM No comments:

Our field season has begun, so I would like to introduce the project to you in this post. I'll continue to post through the week bringing you up to date on our progress.

This project, formally titled "Household spaces and everyday practices at Postclassic Xaltocan, Mexico," is designed to full the requirements for a dissertation in the anthropology department at Northwestern University. Put simply, I want to see how commoners living at Xaltocan changed their everyday lives when they were incorporated into the Aztec empire. A little history about Xaltocan:

Xaltocan is an archaeological site and modern town in the northern Valley of Mexico. It was formerly a human-made island in Lake Xaltocan. The lakes in the Basin of Mexico were drained in colonial and modern times, so Xaltocan is no longer an island. 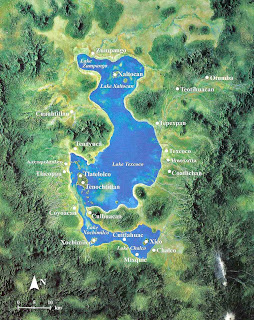 The site was founded at about 950 A.D., and grew to become an important regional center. In 1250 Xaltocan entered into a war with its neighbor Cuauhtitlan. In 1395 Xaltocan was defeated by Cuauhtitlan and Cuauhtitlan's ally, Azcapotzalco. Colonial documents report that residents of Xaltocan quickly fled when they were conquered, and moved to Meztitlan, Otumba, and Tlaxcala. In 1428, with the formation of the Aztec Triple Alliance (commonly called the Aztec Empire), Xaltocan fell under Aztec domination. Colonial documents report that the site was then resettled by the Aztec ruler with tribute payers from elsewhere in the empire. Residents of Xaltocan paid tribute to the Aztecs until the Spanish conquest.

My project will compare houses dating to the period of warfare with Cuauhtitlan (roughly 1250-1400) with those dating to the period of the Aztec empire (1400-1521) in order to look for changes in household life. We will also test the account that the site was completely abandoned when it was conquered. The excavations we have just begun are focused on an area in the southeastern edge of the site, where two small mounds are located.

Here is a photograph of the two mounds, taken from the north, looking south. Mound 122 is in the foreground, Mound 124 in the background.

Surface survey and a test pit on Mound 124 suggest that there are houses dating to both before and after Xaltocan's incorporation into the Aztec empire, so we are excavating here.

In order to locate the houses a detailed topographic map was made and a study using geophysical remote sensing techniques (magnetrometry, electrical resistivity, and ground penetrating radar) was undertaken last week. This project was made possible by a collaboration with the Laboratory for Archaeological Prospection at the Institute for Anthropological Investigations at the National Autonomous University of Mexico. I'll post about this study next time.
Posted by Xaltocan Archaeological Project at 7:36 PM 2 comments:

Permits have been granted!

INAH granted a permit for the project during their September meeting, so we are ready to begin work! I arrive in Mexico City on September 30th, and we start remote sensing work to figure out where the houses are on October 5th. We will likely start excavations on October 13th. Stay tuned-- more updates to come!
Posted by Xaltocan Archaeological Project at 8:03 AM No comments:

If you have any questions about the project, please feel free to contact me (Lisa Overholtzer) at l-overholtzer@northwestern.edu